Closely related to the car seat decision point is the decision about whether or not to bring a stroller when flying.

For some families, I'm sure, the answer to "Should we bring a stroller?" is as emphatic of a yes as our answer to "Should we bring a car seat?" But we really aren't a stroller family in general, preferring to babywear instead. With both kids, I've used a Moby Wrap in the early months. Around 4 months of age, they've both transitioned into an Ergo carrier, which is nice because Hubby will wear it as well as me. (He says the Moby Wrap is too "girly." :)

That means we don't really need a stroller at our destination.

Now, strollers can make it easier to navigate the airport, since they're a convenient place to put the car seat -- which we always bring, as I mentioned in my previous post. When Littles was in the infant seat, we brought a Snap-n-Go stroller frame. The infant seat hooks into the stroller frame. The frame itself is lightweight and easy to deal with, so we didn't mind bringing it along, even if we only used it in the airport.

We brought our travel system stroller (Graco Metrolite) along on the first few trips after Littles moved out of the infant seat, but we quickly discovered that it was more trouble than it was worth. As I mentioned in the car seat post, we stuck the car seat in the stroller to wheel it around the airport, but this meant we had to do a lot of unfolding/folding of the stroller -- when getting on the parking shuttle, when going through security, at the plane itself, when getting on the rental car shuttle at our destination...

Instead, we purchased a GoGo Kidz Travelmate, which is a set of wheels that hooks onto a convertible car seat. This was perfect for us. It allowed us to wheel the car seat easily around the airport, but it was much easier to deal with than a stroller. Then, at our destination, we simply used the Ergo when we needed to transport Littles. On our vacations, we tend to go a lot of places that aren't stroller-friendly (crowded aquariums, hiking trails, etc.) so we really don't miss the stroller.

We went back to using the Snap-n-Go with Noob's infant seat after his arrival, but now that he's out of the infant seat, I fully expect that we'll go back to flying stroller-less. It's certainly not for everyone, but I find it much easier to travel without a stroller! 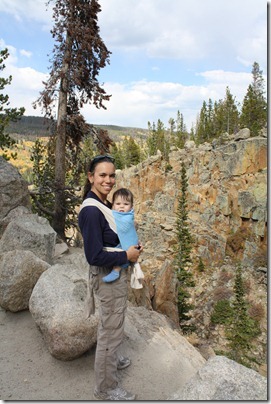 No stroller? No problem! Noob in a mei tai wrap (Littles was in the Ergo) on a hike in Rocky Mountain National Park (8 months old)