As you may have gathered from my previous posts, most of our travels with tots involve flying. But we do take the occasional road trip. This past weekend, we went to visit Hubby's best friend, who is about a 4-hour drive away.

Driving is so much easier than flying because you don't have to jam everything into a suitcase. We have a whole set of baby gear that we use when flying (which I'll get around to reviewing here eventually) -- for that stuff, we look for things that are as compact as possible. When driving, we don't have to place such a premium on small size, so we bring along a different set of gear that is less compact but more functional.

Eating: We don't bring anything for Littles. She does fine in a regular seat for a few days. For Noob, we bring a Fisher Price Healthy Care booster seat. This is one of our all-time favorite pieces of baby gear. It's only about $25 and it's super easy to clean (a very important feature of any high chair!). We use it daily with both kids at home -- Noob still uses the harness and the tray, while we've removed the harness for Littles and push her up to the kitchen table instead of using the tray.

So it's a great seat in general, but as a bonus, it also folds up for travel. It's a little big to fit in a suitcase for plane trips (although we have done that in the past!), but it's just perfect for eating out around town and for road trips. 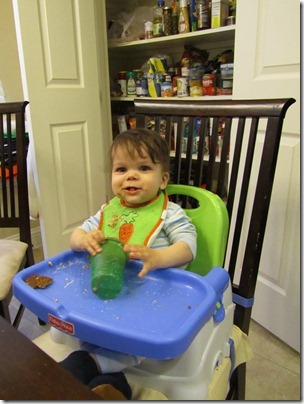 Sleeping: Noob sleeps in a pack-n-play. It is way too bulky for plane travel, but works well for road trips. Ours is a very basic Graco model. It cost about $35 on clearance at Babies R Us. 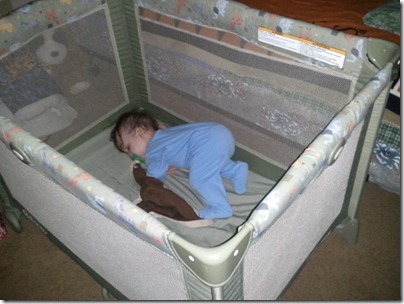 When visiting Hubby's best friend, Littles has typically slept in bed with me. (I sleep in his friend's son's twin bed, while Hubby sleeps on the couch in the living room.) But for this trip, we decided to bring along the nap mat that she uses at preschool. It worked out well! I sewed this myself (details are on my sewing blog), but you can also buy similar nap mats. 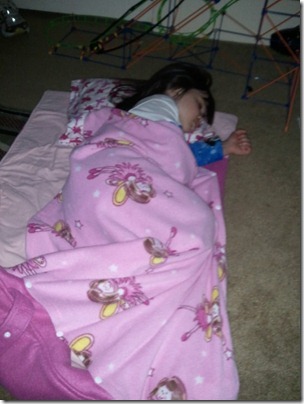 Playing: For road trips, we have room for plenty of toys! We usually bring a pretty wide variety for both kids. Hubby's friend also has kids of her own -- they're a little bit older, but Littles, in particular, loves following them around and playing with all of their toys. That means we don't have to worry too much about what we pack for her.

One absolute essential piece of gear for Littles is the DVD player. She'll happily watch DVDs for the entire drive. Noob doesn't do DVDs yet, so he's a lot harder to entertain on long drives. He's not a real fan of the car seat for extended periods of time. On this trip, I found myself counting the days till he's old enough to watch DVDs, too... :)