To car seat or not to car seat 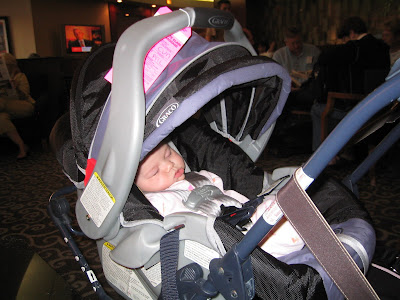 Another key decision point that we make on each of our trips is around car seats. Specifically, should we bring a car seat with us? If yes, should we check it with our bags, gate check it, or bring it onboard?

The answer to the first question has always been straightforward for us: Yes! We have brought a car seat on every single one of our trips. Most of the time, we rent a car on the other end and do a significant amount of driving. Rental car companies do rent car seats, but it's usually expensive (around $10/day), they are not guaranteed to have an appropriate seat when you arrive, and the seat may be in very poor condition. It's much less stressful for us to bring our own.

Once we're at the airport, we do different things with the car seats depending on the situation. Our general rule is that car seats do not get checked with luggage. Reason being, if the car seat gets lost or damaged, we would be stuck in a strange airport with no way to transport our kid. And that would suck. (We do sometimes check it on the way home, since this is less of a concern.)

This means that we've needed an easy way to get the seat to the gate. Car seats are fairly bulky and heavy, so wheels are the way to go:

Once at the gate, we gate-checked the seat if Littles did not have a seat. But as I explained in a previous post, we opted to purchase a seat for her on every trip past 10 months of age. So when she did have a seat, we brought the car seat onboard. We found that she did really well sitting in it, probably because she was used to it from the car.

Around her second birthday, she discovered the joy of kicking the seat in front of her. Unfortunately, the car seat put her in the perfect position to do just that. She was also starting to do activities that required the use of the tray table, like color, play with Playdoh, and watch DVDs, and her car seat did not allow the tray table to fold out fully. So her last trip in the car seat was at 27 months. These days, she sits directly in the airline seat, which gives her full use of the tray table and prevents seat-kicking.

When Noob came along, he was also in the infant seat until about 10 months of age, so we pulled out the Snap-n-Go again for use with his seat. We continued to use the Travelmate for Littles' seat.

We haven't traveled yet with Noob in a convertible seat, but we plan to put him in Littles' old convertible seat, using the Travelmate. For Littles, we recently purchased a Safety First Go Hybrid Booster seat. It is super lightweight (less than 10 lbs) and folds into a small bag for travel. I think it will be a lot easier to deal with than a second convertible seat on a Travelmate! I'll be sure to post a review of it after we do travel with it for the first time.

Updated July 2011: We now travel with Noob in a convertible seat (Britax Roundabout) on the Travelmate, and Littles in a Go Hybrid booster seat. That combination is very easy to transport! Here is a link to my review of the Go Hybrid Booster.