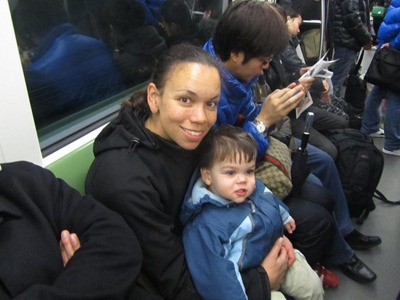 Noob and me on the Shanghai metro

As I mentioned in my last post, we navigated both Shanghai and Beijing by subway, almost exclusively. Much cheaper than taking taxis everywhere, and much more convenient and safe, too, when you're traveling with small children who still require car seats.

Finding your way around
If you've used subway systems just about anywhere else in the world, the Shanghai and Beijing systems are pretty easy to figure out. Ticket machines, station signs, and train announcements are in English as well as Chinese, so you don't have to worry about deciphering Chinese characters to find your destination.

Fares
Fares are pretty cheap by American standards. Most of our rides on the Shanghai metro were either 3 or 4 yuan (about 50 or 66 cents) one-way. The Beijing subway is even cheaper, with a flat fare of 2 yuan (about 33 cents) one-way. In both systems, kids under 1.2 meters ride free.

Security
Many stations have security checkpoints, where you must x-ray any large bags. There are no metal detectors or other security checks if you don't have bags.

Exits
Most stations have multiple exits. It's a really good idea to figure out the numbered exit for the place you're trying to get to, if at all possible. We took the wrong exit out of the metro when going to Yu Yuan Gardens, and ended up taking a roundabout walk of about 15 or 20 minutes to get there. On the way back, we followed signs to the metro, and discovered that there was a different metro entrance that was maybe 5 minutes away :)

Crowded trains
The trains can be quite crowded, especially on weekends and during rush hour. Noob was almost always in the Ergo, which helped tremendously: We didn't have to worry about cramming a stroller onto a packed train, or about him getting lost in the shuffle. We had to pay closer attention to Littles, to make sure she made it onto the train with us and didn't get crushed by passengers who didn't notice her!

Interestingly, we found that in Beijing, people were very accommodating and almost always went out of their way to give up their seats immediately for my mother-in-law (who is in her late 60s) and the kids, and for me if I was carrying Noob, even on the very busiest trains. In Shanghai, this happened probably less than 50% of the time.

Beggars
Technically, soliciting isn't allowed on the subways, but we ran into a couple of beggars on the Shanghai metro. You can usually tell when they're coming because for whatever reason, they all have these karaoke-type machines that they sing into. So when you hear random music on the subway, it's probably a beggar coming through.

One incident that still haunts me is when a woman came through with a boy who was maybe 10 years old. There was something wrong with his eyes. We had read that people do sometimes intentionally disfigure/disable kids so that they'll be able to get more money begging, and both my husband and I got the strong sense that that was the case here. If you've ever seen Slumdog Millionaire, it was like coming face-to-face with that. It makes me sick that someone could do something like that to an innocent child. We didn't give any money, so as not to encourage that kind of behavior to continue.

Littles did notice the beggars and so we explained to her in very simple terms what they were doing and why. With older kids, you may need to be prepared for even more of an explanation.

Where to stay
In Shanghai, we stayed near the Xujiahui metro station, which is on the 1 and 9 lines. We rode the 1 and 2 lines the most by far, so staying on or near one of those two lines is a good idea.

In Beijing, we stayed near the Jianguomen subway station, which is on the 1 and 2 lines. Again, these were the two lines that we rode the most by far. The 2 line basically goes in a big loop around the center of the city, and the 1 and 5 lines cut through the loop. Tiananmen Square and the Forbidden City are both on the 1 line, and the trains to the Great Wall leave from Beijing North Railway Station, which is on the 2 line (Xizhimen station). So if those are your primary destinations, staying anywhere on the 2 line or on the 1 or 5 lines within the loop will put you in a good spot for sightseeing.

The high-speed rail train between Shanghai and Beijing generally arrives at/departs from the Hongqiao Railway Station in Shanghai. This is almost at the western end of the 2 line, so it's a good distance from the downtown area. I think we allotted about 60-90 minutes to get there from Xujiahui.

On the Beijing end, the high-speed rail trains arrive at/depart from Beijing South Railway Station, on the 4 line. It took about 20-30 minutes to get from there to Jianguomen.

To/from the airport
We took a taxi from the Shanghai airport to our hotel, but on our way home, my husband took a taxi with all the luggage, while my mother-in-law, the kids, and I took the metro.

Pudong International Airport is the eastern end of the 2 line. Again, this means that it's a good distance from the downtown area. In addition, the trains serving the eastern stations are shorter than the trains serving the rest of the 2 line, and run less frequently. This means that at Guanglan Road, you have to get off your train to transfer to another train. This might not be so bad when you're coming from the airport, but going to the airport, we ended up being on one of 2 or 3 six-car trains that then had to jam onto a single three-car train. As you can imagine, it was absolutely packed! Honestly, if I had to do that journey again, I don't think I'd take the metro, at least not with small kids. And if you have large amounts of luggage, definitely forget about it.

It might be better coming from the airport, since you'd probably be able to get a seat or at least stake out some personal space right away, which would help if the train did fill up at subsequent station stops. Then at Guanglan Road, you'd be transferring from a small train to a bigger train, which shouldn't be a problem. But still, be prepared for a long trip. It took us about two hours total.

Another option is to take the high-speed rail train, which runs between the Longyang Road station (also on the 2 line) and the airport. This is a little pricier (50 yuan/a little over $8 one-way, or 40 yuan/just under $7 if you have an airline ticket receipt or other proof of purchase), but still way cheaper than a cab.