We did a lot while we were in China, and some activities require a more lengthy explanation than our typical activities while traveling. So I'll do separate posts on what we did in Shanghai and Beijing, and link to them from the overall trip log. (Which I will write up, one of these days...) 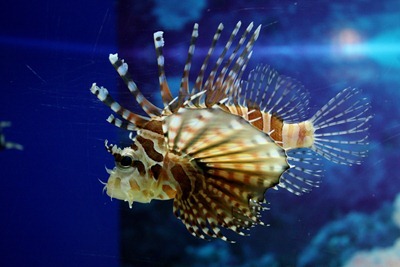 A pretty decent aquarium, not on par with a place like the Monterey Bay Aquarium, but still a very nice place to pass a morning. Easy to find from the Lujiazui metro stop (line 2). 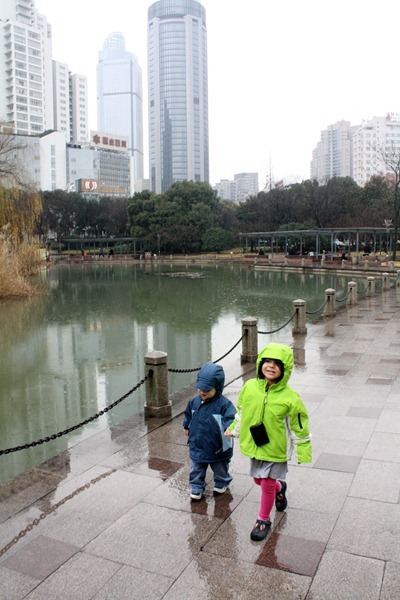 There were lots of little city parks scattered around Shanghai. This one was right across the street from our hotel, and was a nice place for the kids to burn off a little energy and explore. (Even in the cold and rain of Shanghai in January!) There were people practicing tai chi there every Sunday. 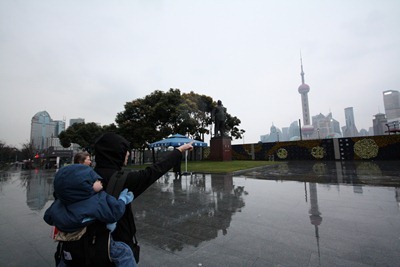 This is always rated as one of the top Shanghai attractions, but I wasn't really sure what it was until we went :) It's basically a walkway along the Huangpo River. On the same side of the river, there are a bunch of historical buildings from the British colonial era. Across the river, you can see the newer buildings of the Lujiazui area (visible in the picture above). It would probably be a lovely walk in nice weather, but you can see that the weather wasn't really cooperating during our trip :)

The closest metro station is East Nanjing Road (line 2), but it's a pretty good walk, so definitely bring your walking shoes and a stroller/baby carrier for the kids. We were somewhat surprised to find that there were no signs in the vicinity of the metro station pointing to the Bund, but it's not too hard to find once you know where you're going: Just walk east down East Nanjing Road and stop when you hit the water :) 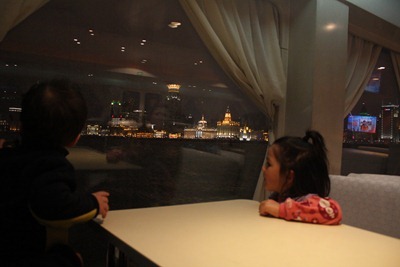 This is perhaps an even better way to see the Bund: Less walking, and protection from the elements! We chose a nighttime cruise, which leaves from near the Oriental Pearl tower -- that's the distinctive tower with the ball on top. It leaves at 7 PM and you can buy tickets starting at 6 PM. To get to the dock, from the Lujiazui metro station (line 2), walk towards the Oriental Pearl and then go down the little side street until you hit the water.

The cruise lasted about 45 minutes. It went up and down the river, turning so that both sides of the boat got good views of both sides of the river. The kids loved riding the boat, and I loved that we weren't out in the rain and cold :)

There is also a ferry that leaves from the ferry terminal, which is maybe half a mile south of East Nanjing Road on the Bund. It has very regular departures going up until 10 or 11 PM, I think. We decided against it, because 1) we couldn't find any information on where the ferry would take us :), and 2) it is a really long walk from the metro station to the ferry terminal. But it's very, very cheap (just a couple of yuan, which is less than a dollar, if I recall correctly), so if you're feeling adventurous, check it out! 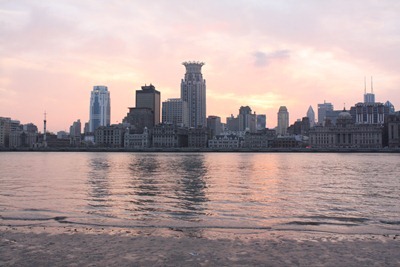 We went out to dinner in Lujiazui one night (there are lots of great restaurant options in the Super Brand Mall) and wandered down to the waterfront for a good view of the Bund from across the river. 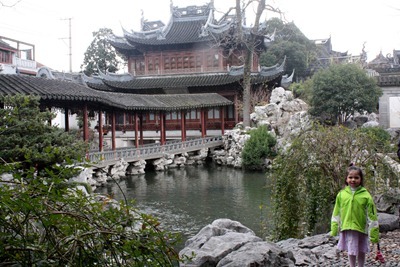 We really enjoyed this place! It dates back to the Ming Dynasty (1500's). There are tons of ponds, bridges, buildings, waterfalls, and other spots for kids to explore. Beautiful! We spent the better part of a morning here and could have easily stayed longer. On a chilly January day, there weren't a ton of other visitors, but I've heard this place gets quite busy in the summer.

The gardens are surrounded by Yu Yuan Tourist Mart, which features tons of stalls selling various souvenirs and other items. Very touristy, but... well, we were tourists, after all! Definitely put your bargaining hat on if you want to buy anything.

You can get here from the Yu Yuan Garden metro stop (line 10). Pay attention to the signs. We went out the wrong exit and ended up taking a very long walk to get to the gardens. I believe the correct exit was exit 3, but double check when you get there. 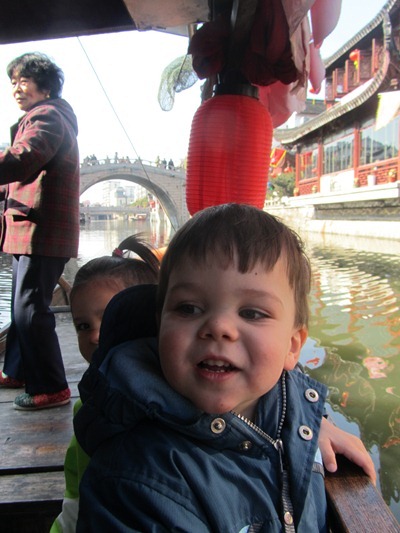 There are lots of "water towns" in the Shanghai vicinity, offering shopping, boat rides, museums, etc. Probably the best-known (due to being closest) is Zhujiajiao. Xitang and Tongli also get rave reviews.

Unfortunately, getting to those water towns presented something of a challenge, especially with young kids. They require hiring a car, taking a lengthy bus ride, taking a complex combination of trains/buses, etc.

So we decided to go to Qibao, which is nowhere near as beautiful and "authentic," but has the distinct advantage of being accessible via metro (Qibao stop, line 9). That allowed us to get in a nice visit and still make it back to our hotel in time for lunch and naps.

What is there to do?

If I were going with older kids, I'd definitely want to check out some of the water towns that are further afield, but with younger kids, Qibao is just perfect. 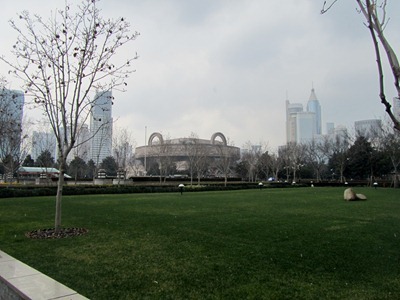 A lovely art museum. If you and your kids are into art, you'll probably enjoy it. My kids were more interested in running around like crazy people, so we didn't stay long :) Which was OK, because it's free! Fairly easy to find from the People's Square metro station (line 2), but it is a little bit of a walk. 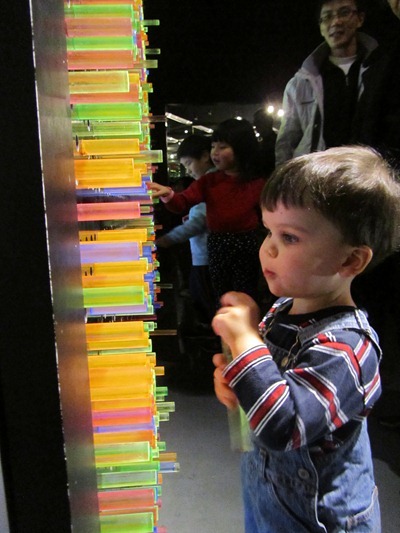 Truly awesome! We planned to stay for a few hours in the morning, but ended up spending nearly all day there. It was fascinating to see science from a Chinese perspective -- a little different from what we're used to in the USA :) The highlight for the kids was definitely the Children's Rainbow Land area. Tons of neat activities that were right at their level, super fun but also educational.

It's impossible to miss from the Shanghai Science & Technology Museum metro stop (line 2). There are a bunch of little stalls/shops attached to the metro station, where we found some awesome deals, like North Face gloves made of Goretex for 10 yuan (a little under $2) -- they retail for close to $100!