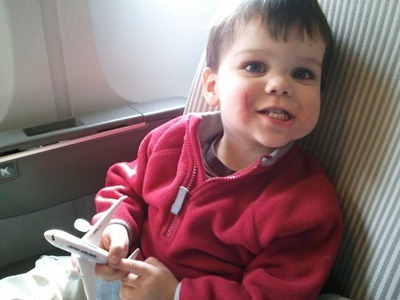 The flights weren't the most fun experience ever, but we all survived. And as it turns out, spending the better part of two full days stuck on an airplane with Noob helped me make some surprising discoveries that should make flying a little easier with him in the future. Although still not easy :)

Surprising Discovery #1: A 14-hour flight is really not that much worse than a 4-hour flight, or even a 2-hour flight.
I was really excited for the flight home from China. After all, the longest leg was "only" 10 hours! Compared to 14 hours for the outbound journey.

I was pretty surprised when the time seemed to drag just as much as it had on the first flight. Really, the flights were not much harder to handle than, say, the 3-hour flight from Dallas to Miami that I blogged about previously. I had a few more "toys" at my disposal: Meals (nonexistent on domestic flights) could chew up close to an hour of time. Having two aisles made going for "walks" a little easier. The personal video system provided a few minutes of amusement.

I won't say that the time flew by on either flight, but let's put it this way: They were 4-5 times as long as the Dallas-to-Miami flight, but not 4-5 times harder to get through. Not even close.

Surprising Discovery #2: Noob is not really The World's Worst Flyer. He's just The World's Worst Sleeper-on-Planes.
During our previous flights, I've noticed that Noob had a hard time settling down to sleep, but I was able to make excuses for it: It's not naptime quite yet, or it's past naptime. This is a new and stimulating environment. There are people up and down the aisles at all times to distract him. It's too bright/light. I could probably get him to sleep but the flight is almost over anyway. Etc. etc.

But when you're flying in the middle of the night, you've been in the "new and stimulating" environment for nearly 10 hours (so it's no longer really "new"), everyone else is sleeping... and the kid still takes hours to calm down and fall asleep? That's because he's The World's Worst Sleeper-on-Planes.

Surprising Discovery #3: Naptime (or nighttime) is the worst time for Noob to fly.
We booked our Thanksgiving flights around Noob's naptime, hoping that he'd take a nap and therefore be easier to deal with. But this backfired when he barely slept at all. I was confused at the time, but now I know it's due to Surprising Discovery #2: Noob has a lot of trouble sleeping on planes. Furthermore, when he needs to sleep and doesn't, he gets really cranky and overtired, and then he's even harder to deal with!

As a result, by far our easiest flight on the China trip was our outbound domestic flight, which left at 6:45 AM. Admittedly, it was also the shortest... but I think it helped that Noob (who is a morning person in general) was fresh, rather than being overtired and in need of a nap. As the day went on, he got more tired and harder to deal with.

Surprising Discovery #4: Noob does better without a car seat.
This wasn't a huge surprise, but we opted not to bring Noob's car seat onboard the plane, and he did way better without it. Most notably, when he was tired, he was able to stretch out more and get comfortable. He didn't sleep quite as much as I would have liked (maybe 4 hours on each of the long-haul flights), but it was better than nothing! Not having a car seat also gave him more room to play with his trains, crayons, etc.

So, from here on out... we'll try to book early-morning flights, we'll gate-check the car seat, and we won't be scared of taking long-haul flights!