Here's what we brought, or should have brought, to our Memorial Day camping trip. I should mention that we were tent camping near a river in 100-degree weather, so those facts drive some of our gear choices :)

Tent
We have a Coleman 8-person Instant Tent.

Our campsite is pretty dusty, so the tent gets dusty too, within about an hour of arrival. Some of the other families brought a carpet or mat for feet wiping, or a Dustbuster to vacuum out the dust. Brilliant.

Air mattress and sheets for adults and older kids
Preferably not white sheets. It's pretty gross to see what comes off your body while you're sleeping. Don't ask me how I know.

Pack-n-play or other spot for sleeping for younger kids
Noob slept in a Peapod Plus on this trip. (We actually forgot our Peapod, and had to buy the Peapod Plus on the way down. I'll save that story for another post.)

Air conditioner, fan, or other cooling device
Hard-core campers will laugh at this one, but when it's over 100 degrees in your tent when your 1-year-old (or your 4-month-old, last year!) is trying to go down for his afternoon nap, you really need something to keep him cool.

Bumbo for babies
We don't use the Bumbo a ton at home, but last year, it was really nice having a spot to put Noob that was at least slightly elevated from all the dirt and dust at the campsite. I also saw a family this year that brought their Bumbo down to the river for their infant to sit in. (This goes without saying, but a Bumbo is no substitute for adult supervision in water.) 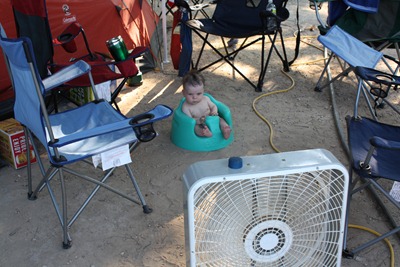 Clothing
It gets filthy, so avoid white/light stuff that you really love.

Clothesline and clothespins
Our tent actually has multiple clotheslines built in, which is handy. But clothespins are still needed to keep stuff from ending up all over the campsite!

Any required medications. Maybe vitamins to keep the weekend from being a complete nutritional waste? Maybe.

Toiletries
Toothbrush and toothpaste. (A mom can dream, right?) Shampoo and soap.

If I ever find an amazing deal on liquid hand soap, I'll stock up and put it in the bathroom at the campsite, because they never have soap and it's a pain to wash the kids' hands back in the "kitchen" at our campsite. (It is in a steep, slippery area that I'd rather the kids avoid whenever possible.) To that end...

...antibacterial hand wipes. Better than nothing.

Diapers (regular and swim) for the non potty trained
This was our third year camping but our first year doing cloth diapers the entire time. We're planning to use cloth diapers on our upcoming trips as well, so I'll probably do a post in September or October about traveling with cloth. For now, I'll just say that it worked out well. The one minor challenge was that the nearest toilet for poop disposal was a bit of a walk from our campsite.

Little potty for the recently potty trained
This was a new addition to our camping gear this year -- we didn't think to bring it last year, even though Littles was potty trained at the time. It worked out really well, not having to run to the campsite bathroom every time she had to go.

Food
On this trip, we always split cooking and cleanup among the families attending. This year, everyone just brought the food to make the meal that they signed up for, which worked much better than trying to coordinate a giant shopping list for all the meals (as we've done in the past).

We also bring snacks for the kids, in case they get hungry between meals or don't like what's being served. Stuff that does well in the heat is best, e.g. cereal bars, crackers, instant oatmeal. We also bring yogurt and fruit in a cooler.

Tip #2: If you have raw meat in a non-vacuum-sealed container in a cooler, put it in a Ziploc bag or something, to avoid raw meat juice all over your lovely fruit.

Don't ask me how I know.

Water
Lots of it. No-spill water bottles for the kids, too. We have the straw cups with their names on them and that was perfect, since it was easy to tell whose was whose.

Booster seat for younger kids
At Littles' age, she is fine without any sort of special chair for eating, but our Fisher Price Healthy Care booster seat definitely came in handy for Noob. Bonus: I could easily hose it down after every meal. It doesn't usually get that good of a cleaning after meals at home, so it was the one item that came home cleaner than it was at the beginning of the trip :) 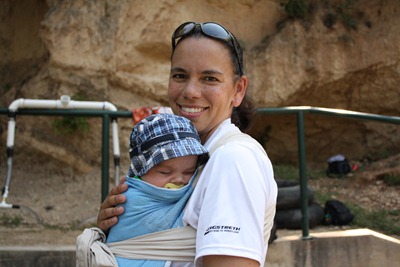 I forgot it this year, and kicked myself constantly for that. It would have been so nice to be able to contain Noob (so I wouldn't have to worry about him wandering off from the campsite) while leaving my hands free. He probably won't need it next year, but I'll bring it just in case!

Toys
Obviously, nothing irreplaceable or non-washable. We brought a backpack full of random toys for both kids, and honestly, they got played with just enough to get completely filthy. Not worth it at all. We usually bring books, too, and they never get read. The only toys that really get played with are sand toys (shovels, buckets, etc.), water toys (water squirters, dolls that can go in water, etc.), and bubble machines!

That's all I can think of for now, but I reserve the right to come back and edit this post as I think of things over the coming year :)

Thanks for the list Lisa! We're taking the boys to Moab in a few weeks...