Cloth diapers in China (and elsewhere)

I've mentioned previously that we use cloth diapers at home. We started when Littles was about 15 months old, so over 3.5 years ago. But for quite a while, we used disposables while traveling. This was mostly for reasons of cost and convenience: Coin-operated laundry can be expensive, and who wants to spend their vacation lugging dirty diapers to and from a hotel laundry room or laundromat?

For the same reason, we didn't use hybrid diapers like gDiapers or Flips (disposable inserts can run twice the price of disposable diapers, and you still have to wash covers) or even "green" disposables like 7th Generation or Earth's Best (pricier than regular disposables). We were literally going through a handful of packs of disposable diapers a year; I didn't feel the least bit guilty if they were -- gasp! -- Pampers.

But for the last year or so, we've used cloth exclusively on all of our trips. It's turned out to be really, really easy. Even going all the way to China!

Packing: We used mostly pocket diapers (BumGenius) at first. They worked fine, but starting with our trip to Panama, I got some Best Bottoms covers and made some inserts. Since Best Bottoms allow you to reuse the shell and just swap out the dirty insert, they take up less space than pocket diapers. This is four diaper changes with Best Bottoms (on the left, a shell with an insert + 3 additional inserts) and BumGenius pockets (on the right): 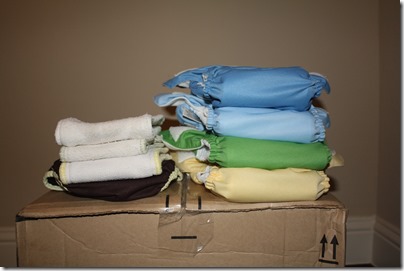 I generally bring about 15-20 diapers total, which is more than enough to wash every two days. Most of the diapers go in our checked bags. They do take up some space, but we're still generally able to fit everything we need for all of us in two large checked bags.

In transit: I put about 4-5 diapers, some cloth wipes, and a small wetbag into the diaper bag, which gets carried on. I also bring a large prefold diaper, which can be used as a washable changing pad.

For China, because the trip was so much longer, we brought an extra rollaboard with more stuff to keep the kids amused. That gave us plenty of space for additional diapers as well. I packed a large wetbag, rather than the usual small one, to ensure there was plenty of space for dirty diapers.

At our destination: As I've mentioned in previous posts, we've stayed in vacation rentals with washers/dryers for most of our recent trips. Even if we used disposable diapers, we'd really need to do this: It's just not feasible to pack enough clothes for four (soon to be five) people to wear for a week or more inside a reasonable amount of luggage. Having laundry facilities allows us to bring about 4-5 changes of clothes per person and wash clothes every couple of days (since the kids normally go through multiple changes of clothes per day...)

But obviously, this also helps facilitate cloth diapering. I bring detergent from home, to ensure that I have something that's cloth diaper compatible. Dirty diapers go in a large zippered hanging wetbag (ours are made by Planet Wise) until laundry day. Then I wash just like I do at home. Easy.

In China, we didn't have any luck finding vacation rentals, so we ended up staying in a "service apartment." This was a hotel designed for long-term stays, so among other wonderful benefits (like multiple rooms and a kitchenette), it had a washer/dryer in each unit.

On daytrips: When we're out and about, we do exactly what we do on daytrips at home: We bring enough diaper changes for however long we plan to be out, along with a small wetbag for dirty diapers. Since it's not always easy to find a good spot for changing diapers when you're on the go, I'll often prepare the diapers with some extra inserts for more absorbency. That way, it's not a problem if we end up having to go longer than usual between diaper changes.

Any problems? The biggest problem I've run into is that the diapers often start to get stinky by the end of each trip, likely due to not quite having the wash routine right with unfamiliar water and washers. I just wash the diapers with a little bit of bleach when we get home, and that takes care of the stinkies.

In China, one challenge was that the washer/dryer (it was all one machine) was labeled entirely in Chinese :) Cloth diapers generally require an initial rinse, then a normal wash cycle with an extra rinse, then into the dryer. Well, I couldn't figure out how to do just a rinse, so I ended up having to do two full wash cycles for each load. And the wash cycles were really long (like 2-3 hours), so it usually took the better part of a day to get the diapers washed. A bit of a pain, but with the washer/dryer being right there in the unit, it worked out fine: I often started a load in the morning, then started the second wash cycle when we returned to the apartment for naptime.

Is it worth it? Absolutely. A lot of people think that traveling with cloth is a hassle, but we really haven't found it to be any different from using cloth at home.

Oh, and in China, disposable diapers ran as much as $40 for a jumbo pack (about 35-40 diapers, depending on size). Ouch. When we saw that, we were very happy that we brought cloth :)