Yes, this post will talk extensively about toilets. You have been warned.

Most toilets in China are just like the ones bck home. But at some point, you'll likely encounter a Chinese toilet, or squat toilet. If you've never seen one before, it looks like this (courtesy of Wikipedia): 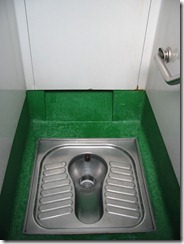 (You may encounter these elsewhere in the world, too. For example, I used one on a trip to Japan, and one of my friends said that she had to use one at an Italian train station.)

Needless to say, these posed a bit of a challenge for Littles during our travels in China. Aside from the fact that, well, they're just different from the potties she's used to back home... she was physically too small to use them properly. The leggings or tights she wore did not allow her to separate her legs enough to straddle the toilet as she needed to.

What I ended up doing was this:

I would strongly recommend being with your child the first time they encounter one of these toilets. Littles' first time was with my mother-in-law. Her solution to the squatting problem was to remove Littles tights. Which required removing her shoes. Then, Littles was indeed able to squat over the toilet... barefoot! I'm not easily grossed out, but that still makes me shudder, over a week later. I made sure to go with Littles the next two or three times she used a squat toilet, and by then, she was a pro and could use one with assistance from anybody. With her shoes on.

Even older kids who are fully bathroom-independent back home may need some help with these toilets the first few times, so be aware.

This should be less of an issue for boys, since they can just stand up to go, but I was still very glad that Noob was still in diapers for this trip :)

A couple more tips for these types of toilets: