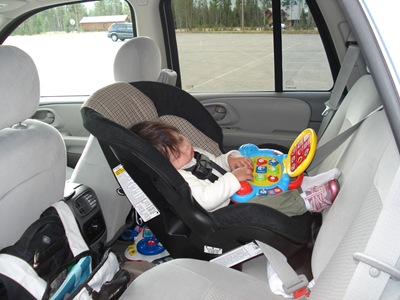 This post is part of a series on top kid travel gear.

Funny, we actually did not purchase our Cosco Scenera car seat with the intention of using it while traveling. We bought it when Littles was about 1 year old to leave with her sitter/nanny, so that she could drive Littles during the day while she watched her. We chose it because it is cheap (about $40 at Walmart) and gets great safety ratings.

But as it turns out, it's a perfect travel seat as well. It is lightweight, so it is easy to drag around the airport. It is narrow, so it fits easily in airline seats. It comes with its own handy bag for travel. And since it's cheap, I never worry about it getting lost or damaged while in transit. If that does happen, it will be no big deal to just buy a new one!

The Scenera does rear-facing from 5-35 lbs and forward-facing from 22-40 lbs. Littles still fits easily into the seat at 3.5 years old.

Downsides? There are a few:

Due to that last point, I think we'll end up traveling with the smaller of our two Britax seats (a Roundabout) on our future trips, now that we have the Travelmate quick release strap. But I sure will miss traveling with the Scenera. Having an extra seat for travel is a bit of a luxury, but it's really nice to not have to hassle with reinstalling the car seat when you arrive back home late at night and have two tired kiddos on your hands!